I've wanted a B-king for a long time. And, I've been kicking myself when I passed up on all the leftovers that were here in the states. (around 2011) Well, today, I found one that has minor damage. It's been sitting in his garage for a while, (last time it was registered was 2014) and it's only showing 4950 mi.

The only part I really need to get it back on the road, is the plastic headlight support. The rest of the damage is superficial.

I'll post pics once I get the parts together.
dr hondaGot It To Third Gear


I got everything ordered that I think I will need to get her back on the road. Looks like some of the parts may show up as early as tomorrow !! I guess if things go right... I may be able to get her back up and running by the weekend. (Let's keep our fingers crossed)


Here she is coming home.

dr hondaGot It To Third Gear

more_horiz
Hi and welcome to the .ORG

The bike doesn't look that messy. It lacks a few bits here and there, but I believe you will put it back on the wheels in no time.

more_horiz
Cool project.
Get it back on the road with pics too!
danodemotomanGot It To Third Gear

Two of my bikes were damaged / repairable's.

They worked out good value and its quite interesting and
rewarding fixing it up. Well done.
Tony NitrousFifth Gear And Gone

more_horiz
We need some pics!

more_horiz
I'll post up a few more pics in the next few days. But... I've been working on it all week, and I have all the mechanical done. So, I took the bike out for a little ride, and even got it to pass a state safety inspection.

I have a few more cosmetic things that need addressed though. (mirrors, and headlight surround) But it's getting close to being done.
dr hondaGot It To Third Gear

more_horiz
The path to recovery wasn't too bad. The bars have a slight bend in them... and the left mirror is a little beat up... but she's fully rideable!! Here's a quick pic from this afternoon, next to her stable mate. A Honda Grom making a full 9 HP ! (LOL)

dr hondaGot It To Third Gear

more_horiz
Good on you getting it back to riding condition.
danodemotomanGot It To Third Gear

more_horiz
Nice 1 Dr Honda , and what do you think now you have ridden it ?
GuestGuest

davehutch wrote:
Nice 1 Dr Honda , and what do you think now you have ridden it ?

It's just how I remembered.

Back in 2009... Suzuki brought them in their Demo Truck to a local Motorcycle rally. (Thunder in the Valley)   And I got to ride one for the first time.  I remember that even though it was a monster of an engine... it was very usable, and very easy to control.

So... for the past 3 years... I've been keeping my eye open for one.  But all the ones local to me were either over-priced (wanted almost full retail) or they were totally bastardized. (bad mods/raced)  The bike I bought was raced... but it was cheap.

I'm not a fan of the side exhaust. It sounds good, but as you can see, I had to put heat wrap on it, to keep from melting my boot. I have most of the stock exhaust... but it's so dam heavy, that I don't think I can bring myself to put it back on. Maybe I'll keep my eye open for a used undertail, and swap it this winter. But for now... summer is just stating here in Pitt PA, and I'm going to ride.


Anyway... I have some new handlebars ordered, and they should be here today.  AND... Some new, cheap mirrors that will be here by the weekend.  I'll make posts in the general section on those.
dr hondaGot It To Third Gear

more_horiz
When you get ready to swap out the exhaust, let me know. I've wanted to try a side exhaust. I would be interested in buying it. Let me know.
WarriorDog Forum Donor

@WarriorDog wrote:
When you get ready to swap out the exhaust, let me know.  I've wanted to try a side exhaust.  I would be interested in buying it.  Let me know.

Well... I may be talking to you soon.

I love the sound of that exhaust. Nice and deep, but not too loud. But I hate the look. I'm very tempted to put the stock exhaust back on the bike. I know to most, the stock looks goofy... but that's the charm of this bike. It was an excursive in extreme.
dr hondaGot It To Third Gear 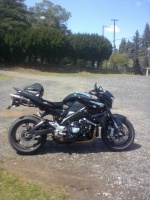 @Rabo wrote:
Welcome fellow South Western Pennsylvanian.  "Yinz"(You and the BKing) are going to find this forum quite helpful! Congrats!


I was lucky to spend 2 perfect days in your part of town.  My Cousin and I were at Thunder in the valley ridding as many demo's as we could get on.  The Suzuki tent was a good time.  On Friday... it wasn't too busy, and we would get off one bike, and right on another.

FYI... even with thousands of bikes out there... I only saw one other B-king. I'll assume it wasn't you, since the bike had the stock exhaust on it. When my cousin saw it... his response was, "Why would you want to put that back on?" (I kind of like the original exhaust)
dr hondaGot It To Third Gear

more_horiz
Another Yinz- King in the Burgh!
DaliFound First Gear